This weekend, the first weekend in May, we traveled to New York for the TD Five Boro Bike Tour, a 40 mile ride through the streets and over the bridges of NYC. Dave had done this years ago when the tour first began in the city, but for the rest of us it was the first time and a bit intimidating.  The tour starts at the tip of Manhattan where we joined 32,000 other cyclists packed shoulder to shoulder on the streets of the city. All helmets bedecked with the official TD helmet cover. It was obvious that we should have packed something to adorn our helmets to make each other recognizable during the ride.
It was an amazing day. The ride was not fast, at least not for those of us in the third wave of the day. Just a great day of biking through the city. We biked up Manhattan through Central Park, wheeled just a bit into the Bronx, before heading over to Brooklyn, Queens until finally we crossed the Verrazano bridge onto Staten Island. Having a long uphill climb on the bridge at the end of 40 miles was tough, but the glide down was oh so sweet.
Packing for a weekend in New York City can be challenging. The casual clothes of a New England librarian/birdwatcher/grandmother just don’t cut it in the Big City. So we need to step it up a notch while anticipating weather variables and planned activities.

We'd love to hear your thoughts on this! Cancel reply 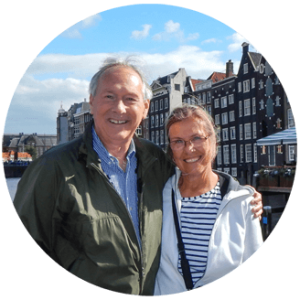 Amy and Dave are recent retirees juggling the fun of travel with the responsibilities of family.

We love wildlife, the outdoors, and exploring on bike or on foot. We sprinkle in a bit of luxury travel when we’re able to and feel it’s really worth it.

We’ve made changes in our lives to allow us these journeys and hope by sharing our insights, you too can travel to your bucket list destinations!

Read more about us and our favorite places – About the Tulls

This article may contain referral links.

TravelingTulls is a participant in the Amazon Services LLC Associates Program, an affiliate advertising program designed to provide a means for sites to earn advertising fees by advertising and linking to Amazon.com. We are not provided with any products by Amazon but receive a small fee if you purchase an item through our link at no additional cost to you.

TravelingTulls has not been given any products listed for review. We only recommend things we have tried and hope will help you in your travel. If you choose to purchase based on our recommendation, please let them know where you heard of them!